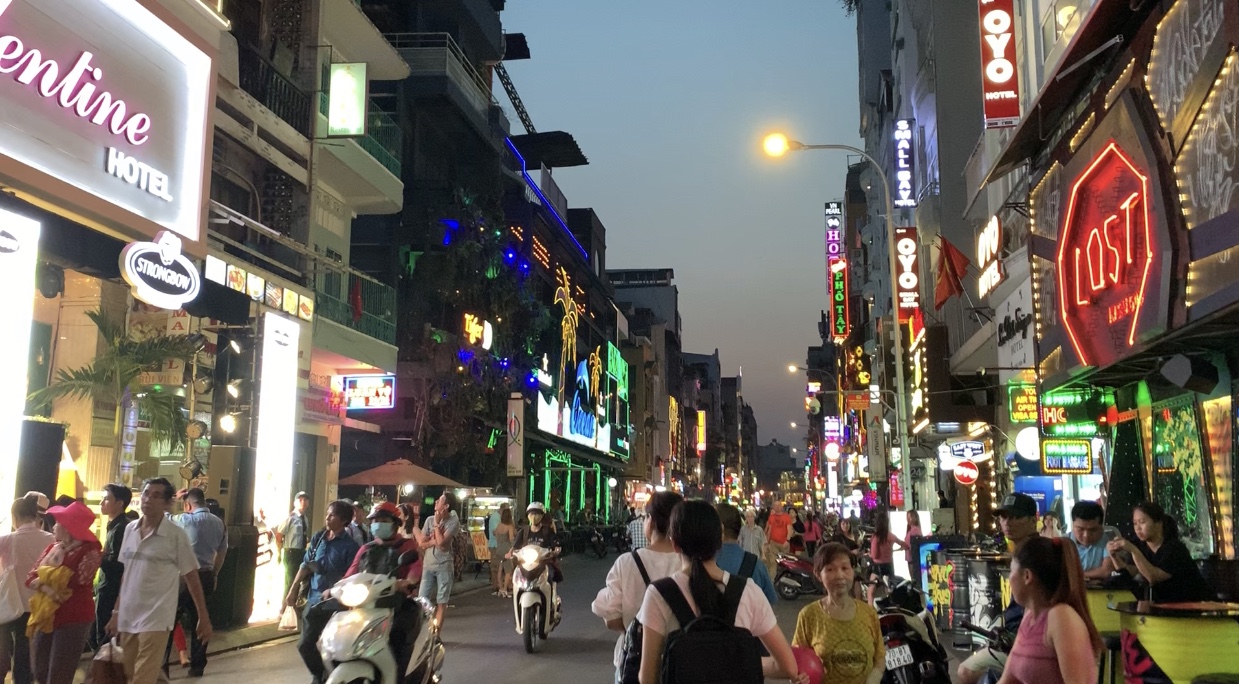 I traveled to Thailand and Vietnam over my winter break with International Business Seminars. I had the opportunity to learn about tourism in Vietnam firsthand and loved the experience. 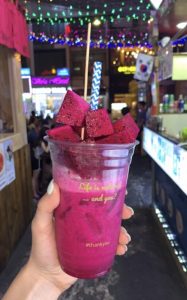 Going to the Street Food Market in Ho Chi Minh was also one of my top experiences on the trip. It was super neat to be able to try many different kinds of food. The street market was lined with a bunch of different food counter stations to choose from. It is very different than American food since they have many fruits, vegetables, and spices that Americans don’t always have readily available. I even tried a dragon fruit smoothie and it was amazing! The market was relatively close to our hotel so it was a convenient and quality place to go when hungry. The first time we went to the market we went with some Vietnamese students from a local university. One of the students I was talking to was super funny and we got along really well. She shared a lot about her culture and vice versa. I found out that many of the students listen to American music. We were able to relate to popular Tik Tok songs and videos. It was interesting to see how American culture affects other cultures around the world! She also taught me how to use chopsticks more effectively. I loved talking to the students since they were our age and also studying business, there was a lot we could relate to. Going to the street market with them was a really great way to taste a bunch of local Vietnamese foods and really get to know the culture. 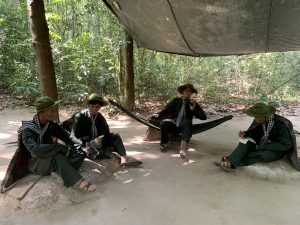 Before the group and I went to the Vietnam war grounds, we stopped at a small shop. There were Vietnamese people, who were victims of the chemical warfare used in the Vietnam War, hand-making all sorts of art out of eggshells and seashells, paintings, jewelry, and much more. All of the artwork was so exquisite and beautiful. Tourists can purchase any of the artifacts and the money would be used to help those who are handicapped and suffered from Agent Orange exposure. Agent Orange is a toxic herbicide that was known to be used by the US military during the Vietnam War. It was really sad to see the people but it makes me feel grateful for the life I do have.

After some of us bought art pieces, we went to the war grounds. There we got to see and go in the underground tunnels that ran through the base. We got to see all sorts of neat things. There were weapons, aircraft, and even demonstrations of the war traps and how they could kill their enemies. A group and I went to the museum after as well. There we got to read and look at even more photos and preserved artifacts.

Officially, Vietnam is an atheist region. I think this was the most shocking thing to me because there were Buddha statues everywhere in Bangkok. More of the older population is connected with their religious ties than the younger generation. Buddhism makes up almost 15% of the religious population while atheism is almost 74% making it the most common. 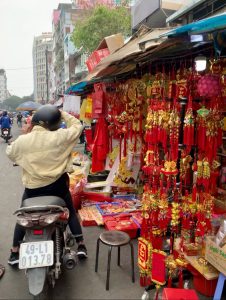 The street traffic in Vietnam is insane! First, there are way more motorbikes in the street than cars. This is good to keep the traffic moving but it is a lot to keep up with if you are unfamiliar with the street rules. Everyone is weaving between each other and trying to get to their destinations. The streets are also really loud with beeping and other city noises. Walking signals and crosswalks do not hold much authority here when a motorist can easily maneuver around you. People in or on vehicles will not stop for pedestrians unless they absolutely have to. I learned how to cross the street but it was pretty scary at first. You should generally walk into the street confidently once there is a break in traffic and have faith that no one will hit you. It seems like suicide at first but this allows the motorists to swerve around you without stopping. And that is the key—don’t stop walking or change directions. If you stop the motorists will be confused about which direction you are going and they won’t know which way to swerve. They might even yell at you when passing by.

Motorists also do not follow traditional traffic rules. For example, staying off sidewalks, going the right way down a one-way street, or stopping for red lights. One of the Vietnamese students also warned me I shouldn’t keep my phone in my pocket or hold it loosely in my hands because a motorist might snatch it and drive into the dense traffic. I made sure to always be on high alert when in or crossing the streets. As long as you are aware of your surroundings, it was easy to adapt to the fast-paced culture! 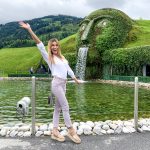 I love meeting new people and experiencing all life has to offer, but it is through the connections we build, where true value is found.