Stamford Bridge- It’s Not a Bridge

Visiting the home of the Chelsea Football Club was an amazing experience! Our tour guide was great and so we learned a lot about the history of the venue and the strategies that the team executives are implementing to gain a larger fan following across the globe. Visiting Stamford Bridge was by far my favorite executive experience during my Winter Two Seminar! 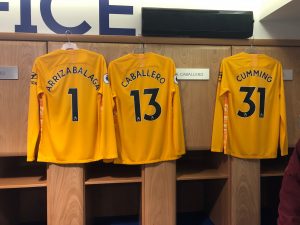 We were first given a quick history lesson about Stamford Bridge and Chelsea FC. The team has played at Stamford Bridge since they were founded on March 10, 1905. This is quite impressive! Stamford Bridge’s legacy can be compared to that of Fenway Park and Yankee Stadium. Although the venue is small and is expected to undergo many renovations, it is considered a historical landmark in the football community. The tour guide also mentioned the impact that Brexit will have on the club. The club itself is expected to continue to be managed the same. However, it is the fan base that may change. Because of the new laws and regulations being implemented due to Brexit, it may be a bit more challenging to attract fans from Europe by way of sales. Brexit may impose some limitations on the sort of business methods and strategies the club can implement in Europe if any at all.

• Stadium seats – One of our first stops was the stadium seats. I personally had never been inside of a soccer (a.k.a. football) arena, so it felt so surreal to have an entire stadium all to ourselves! The view from our seats was incredible. One thing I found interesting was that the executives’ seats don’t have the best view. Our tour guide informed us that the venue doesn’t carry very good symmetry considering its age and the many renovations it has already undergone. Some of the renovations only added to its unbalanced symmetry. I learned that many of the coaches, executives, and bench players prefer to stand to get a better view of the game since their seats are a bit distorted symmetrically. The best view in the venue is quite far up! The higher the seats, the better the view! 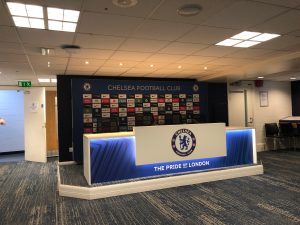 Pressroom – The press room is surprisingly small. Our IBS group took up a good portion of the space. It must be packed on game day. The room is supplied with drinks and snacks for the press. We learned that this is a small way that Chelsea FC tries to convince the press to write nice stories about the club and Stamford Bridge. I found this funny but impressive!

• Tunnel – Music played as we walked through the tunnel and onto the edge of the field! This was a fun experience. Being on the field level was yet another surreal moment. This is where we saw the executives’ seats. They looked nice and comfortable, but again, not the best view considering that the seats were somewhat indented into the ground which causes you to look up at the field instead of being eye-level with it. Nonetheless, walking through the tunnel and sitting in the executives’ seats was an exciting experience!

• Locker room – We got to sit in the home and away locker rooms! The away locker room is purposefully small and dark (another funny fact). The home locker room had the athletes’ jerseys hanging over their assigned lockers. We learned that there is a system for locker assignments. Athletes who speak the same language are often assigned lockers in the same general area so that it is easier to communicate and become acquainted with the club. Player positions and tenure also play a role in the locker assignments.

• Gift shop – The gift shop was the best! It is a two-story gift shop, and they have sales on major items like sports jackets! It was fun to shop around in there.

• Fun fact- There is a women’s Chelsea FC!

Getting down to business 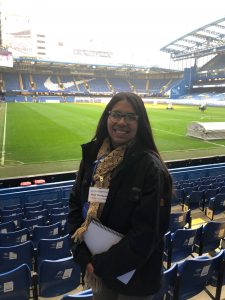 Although Stamford Bridge is a historical landmark, I learned that it is not meeting its demands. Chelsea FC is such a popular team and the stadium is just too small for its fan base. Stamford Bridge executives are currently considering options to completely move the venue elsewhere in London in order to add more seating and new and larger features. Although it is small in size, it is easy to get to via underground, and again, it is a historical site. For these reasons and more, whether or not to relocate and rebuild the venue is currently in discussion.

I appreciated learning the ins and outs of the venue and all the business aspects that come along with it! You can only learn stuff like this by actually visiting Stamford Bridge and hearing it from the employees themselves! This was such a great experience. I am so grateful that I was given an opportunity like this! 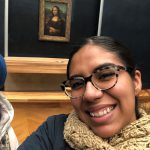 "Exploring a new country can be very scary and intimidating, but confidence and kindness go a long way in every language."