Top 5 Things to Do in Shanghai

Shanghai is China’s biggest city and a global financial hub. During the Summer China Seminar, you will have plenty of things to do in Shanghai. Whether you want to learn more about Chinese history or see picturesque views, Shanghai has something for everyone.

5 Things to Do in Shanghai

The Bund is Shanghai’s picturesque waterfront. This is where you’ll find those classic skyline photo-ops. The Bund offers a stunning view of skyscrapers standing across the Hangpu River, including the Oriental Pearl TV Tower, the Shanghai World Financial Center. The waterfront is lined with restaurants and shops, housed by gorgeous European-styled buildings.

The Shanghai Museum is called one of the best museums of China. It houses a diverse collection of artifacts that chart the nation’s history. Highlights include ornate calligraphy, exquisite jade carvings, thousand-year-old bronze works, and traditional Chinese garb. 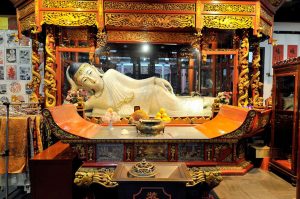 The Jade Buddha Temple is one of the city’s most popular attractions. It impresses visitors with its legion of statues. The temple was originally built to house two jade statues brought in from Burma.

Dating back to the 16th century, the 5-acre Yuyuan Garden is the city’s most revered green space. The garden took nearly 20 years to construct. It was initially intended to be the private garden for Ming-dynasty official Pan Yunduan and his family.

Nanjing Road stretches six miles total and boasts retailers from all over the world. In the daylight, you’ll admire the graceful architecture of the surrounding buildings. At night, you’ll marvel at the illuminated logos and brand names that line the avenue.