Posted by Natasha Pate on October 2, 2020 in IBS Student Blogs 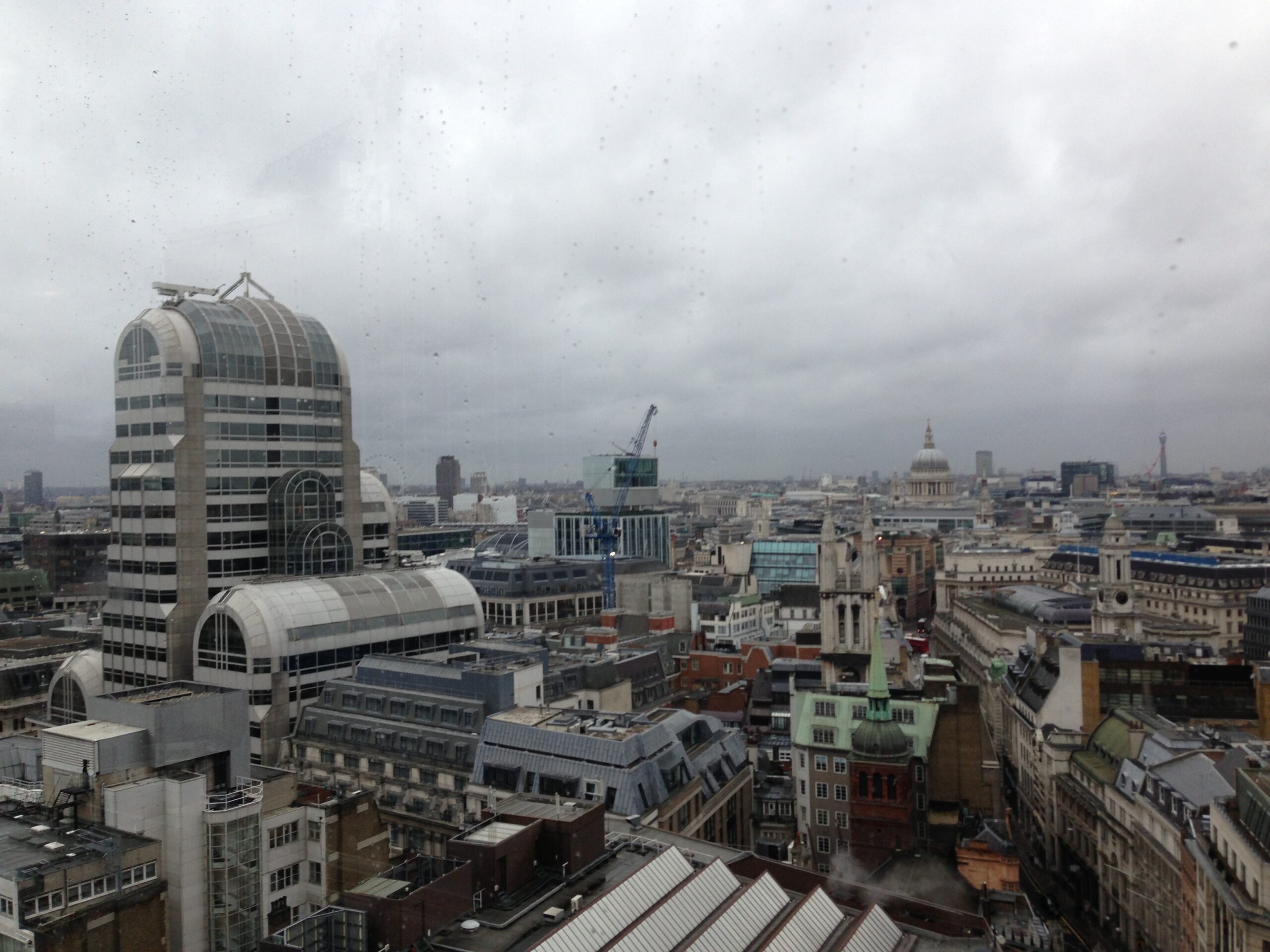 Before the seminar, I had no idea what Lloyd’s of London was, let alone that it is one of the most famous buildings in the world. I quickly learned it was unique for a variety of reasons. Firstly, the term Lloyd’s refers to just the building, hence the expression commonly used by those in the insurance industry is “insure at Lloyd’s”, not buy insurance from Lloyd’s. It is a marketplace for underwriters or the insurance companies, and brokers, agents who try to get the best deal for their clients, to meet and make deals. The Lloyd’s staff of 900 only serves to ensure compliance with regulations and that everything within the building continues to work smoothly.

In the Heart on London 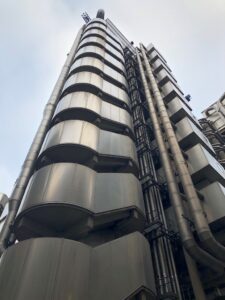 It is truly an international operation through which underwriters cover over 220 countries, excluding only those countries on the United Nations embargo list. Located within the City of London, the name for the financial district, the building was designed by architect Richard Rogers. The postmodern design looks inside-out, meaning the ducts, pipes, and elevator shafts are located on the exterior of the building to offer more space inside.

Lloyd’s as we know it today is a far cry from where it started in the 1600s as Lloyds Coffee Shop. In the beginning, sea captains would come by the shop while docked on the Thames River in London and share stories of sinking ships and how the captains were liable when gold, supplies and other valuable resources were lost. Bankers and insurance underwriters would overhear these conversations. Soon they saw an opportunity in providing insurance for these ships, running this business out of the coffee shop. William Lloyd, owner of the coffee shop, began charging rent for the booths the businessmen used, which is what they are still called today.

A rich history in London 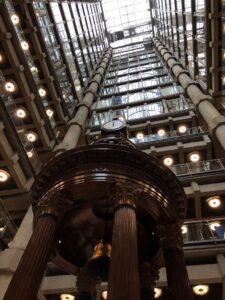 The Lutine Bell in the middle of Lloyd’s

Although Lloyd’s background was primarily in maritime insurance, today it is known in popular culture for providing insurance for a number of interesting clients. Most notably, Lloyd’s of London has been involved in the insurance of the model’s legs, Will Smith’s life when he bungee-jumped out of a helicopter for his 50th birthday, and the taste buds of the taste tester for Costa coffee.

However, the seafaring heritage is honored by the staff of Lloyd’s, still called waiters from the coffee shop days, who maintain a Loss Book of daily sinking ships around the world. The entries from today’s date 100 years ago is showcased in a glass case. It is amazing to compare to today’s book, where there are far fewer sunken ships.

In addition, the Lutine Bell, recovered from the HMS Lutine in 1858, now hangs in the center of Lloyd’s building. It was traditionally rung when news of an overdue ship arrived, once if it sunk and twice if it returned. Now the bell is only rung for ceremonial purposes such as the death of a member of the Royal Family or global disasters such as 9/11, the London bombings, and at the start and end of the two minutes silence on Armistice Day. 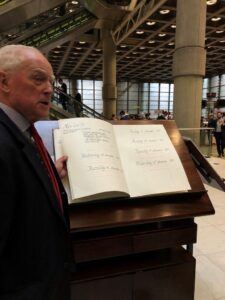 Our presenter shows us recent entries in the Loss Book

Lloyd’s is also focused on the possibilities of the future. The main source of premiums has already shifted once from the maritime industry to reinsurance; in the near future, it could change again to cyber, autonomous vehicles, and other industries related to technology. To address these uncertainties, the Lloyd’s Lab housed inside the iconic London building provides a space for innovation and collaboration between startups and insurance agents. The aim of this partnership is to provide support for new ideas and solutions that could potentially revolutionize the insurance industry.

The opportunity to visit Lloyd’s of London was a once in a lifetime experience that opened my eyes to the world of the insurance marketplace. The blend of past and future is reflective of the British culture that cherishes tradition but also fosters innovation – after all, who knows what unique person or item might be insured at Lloyd’s next. 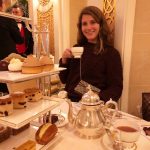 "Traveling is not a way to escape your life, it’s how to make sure your life doesn’t escape you."