Whenever you travel to a new country, it goes without saying that you should completely immerse yourself into the culture and interact with the locals. Learn the public transportation system, explore the historical museums, and eat at neighborhood restaurants.

Personally, my favorite way to engage with a new culture has always been through food because it is a necessity people do every day and an integrated part of the country’s history. Therefore, for this blog, I will share with you one of my most memorable food experiences during my visit to France. Ultimately, my hope for you after reading this is that it will inspire you to find your own unique ways to learn about another culture next time you travel.

One day that I made a visit to the Palace of Versailles to see the magnificent residence of Louis XIV. They had an elegant cafe inside called Angelia. Usually, I do not have a large sweet tooth, but I was in the mood for some cake and came across something called Gâteau d’opéra. This “Opera” cake was a decadent dessert that had layers of almonds and hazelnuts with chocolate mousse and just a hint of coffee flavor. Its structure is very similar to a tiramisu dessert. This French creation is ten times richer and has more of a subtle and sweet taste than a bitter one. 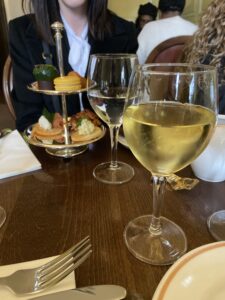 As I was about to start eating my cake, a waiter quickly came to me and asked if my wine came yet. I did not order any and he became flabbergasted. This came as a shock to me because I usually do not drink wine period. At this point, I figured I should take his recommendation because he seemed to know what would complement my dessert. He ended up bringing a glass of Sauternes- a white wine that originated from Bordeaux, located in the southwest part of France.

After a while, my waiter returned to sit down with me to explain why he became so surprised earlier when I did not order a drink. He told me that French people always have a glass of wine when eating dessert as it is a part of their etiquette and tradition. We ended up chatting for quite some time.

Just from this encounter, I learned so much about the wine-making process from my waiter and about the eating habits of the French people. For example, it was quite a culture shock for me that the waiter didn’t bring the check unless it was asked for. Typically in the United States, waiters place it on the table if the meal is reaching an end. However, as compared to their American counterparts, a waiter in France takes a more passive approach and does not try to gesture or rush the guests out. I found this very pleasant as I was able to enjoy my dessert without being pressured to leave.

With that being said, I learned French waiters do not work for tips, which means it is unlikely that he or she will constantly check the table to see if you need anything as customers are expected to flag them down when in need.

What I learned about French Culture

From this experience, there were also a bunch of other unspoken rules about the French eating etiquette that I learned from observing. One of those things included the times in which people eat; 12 P.M. to 2 P.M. is considered a “sacred” time for lunch and anything before 7 P.M. is considered “early” for dinner. This demonstrated to me that the French people not only take pride in their nation’s culinary reputation, but they also take leisure in enjoying their mealtimes.

This was a stark contrast to the typical restaurant culture in the United States because the approach there is to get customers in and out as quickly as possible to maximize the profits. I actually really appreciated this part of their eating culture because it reminds me that in order to enjoy the simple things in life, you do not have to look far.

Who knew that this cake and wine pairing would not only be one of my favorite desserts of all time, but also the gateway to learning so much about the culture it comes with? By just eating in a simple cafe, I not only got a true glimpse of the daily lifestyle of French people, but I also learned a lot about myself along the way. 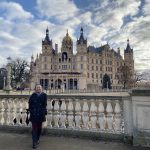 I attended the Winter MBA 2020 Seminar!